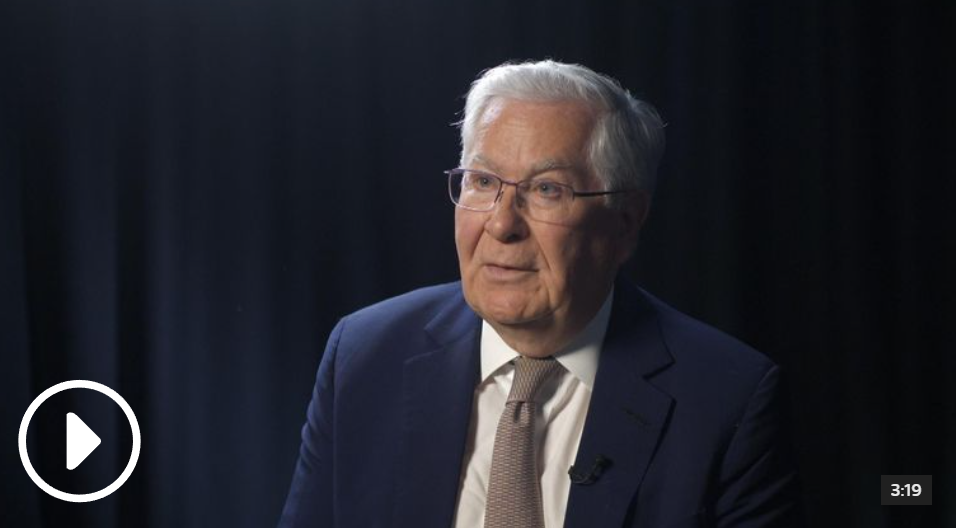 Lord King takes aim at central banks, accusing them of being part of the inflation problem amid a "failure of the economics profession" during the COVID crisis.

Britons must brace themselves for a “very unpleasant period”, with “considerable” interest rate hikes now needed to prevent a re-run of the 1970s, former Bank of England governor Mervyn King has warned.

Lord King launched a coruscating attack on central banks including the Bank of England itself, saying they shared responsibility for the cost of living crisis having fuelled a rise in inflation by printing hundreds of billions of pounds and dollars during the pandemic.

He said they would have to raise interest rates immediately.

Blaming a “failure of the economics profession”, he said that central banks would have to deliver unpalatable medicine to prevent an inflationary spiral.

He said: “When you get an intellectual mistake in policy, and you allow inflation to rise, if you’re then hit by bad luck – which is what happened in the 1970s and is happening now – it becomes a very unpleasant outcome.

“It takes tough action. And it’s not a pleasant period through which we’re going to have to go.”

In an interview with Sky News for a special report on the cost of living crisis, The Economic Shockwave, Lord King said interest rates had been held too low for too long, with too much “quantitative easing” (QE), whereby banks print electronic money to pump into the economy – something economists call “loose” policy.

“We know what the problem is: monetary policy has been too loose,” he said. “It needs to be tightened. And the problem for central banks is that, for very understandable reasons, they don’t want to say: ‘You know, maybe we got it wrong in the last year or so.’

In the face of the pandemic, the Bank of England cut Bank rate (its base rate) to a record low of 0.1% and printed a further £250bn, bringing the total amount of money created under its QE scheme to £895bn.

Lord King said: “They shouldn’t have been printing the extra money; what governments were doing was enough to deal with the consequences of COVID. They’re now worried about inflation, when they weren’t before… [But] it’s not all the result of the Russian invasion of Ukraine. This was foreseeable, because there was a mistaken diagnosis of what needed to be done with the pandemic.”

The comments come amid growing criticism of the Bank’s role in dealing with the rising cost of living, with inflation now at 9% and expected to hit double digits by the end of the year.

‘What do we think is going on here?’

Lord King said his criticisms applied to all central banks, who “should be asking the question, what do we think is going on here? You know, if we keep printing money at this rate, what will happen? And the answer is obvious: you’ll get inflation”.

While Lord King intervened during Mark Carney’s term as governor, in particular over the Bank’s conduct during the Brexit debate, this represents his sternest comments yet on how the Bank is carrying out its main role: to keep inflation close to its 2% target.

He said that his points were directed not directly at individuals such as the current governor Andrew Bailey, but more broadly at the economics profession.

He signalled that interest rates would need to rise well beyond 2% – the level many economists expect them to peak at – to bring inflation under control, saying: “The idea that 1% interest rates, even 2% interest rates should be the norm, I think, is a very odd idea to hold.”

His interview forms part of Sky News analysis about the realities of the cost of living crisis.

The film, due to be broadcast later on Friday, examines how energy costs are gradually percolating through all sectors of the UK, turning from a narrow price rise into a broad-based inflationary surge.

‘Everyone takes a hit’

It traces prices along supply chains, from the production of salt to chemicals manufacture to other sectors like glassmaking and hairdressing.

In each case, participants warned that prices were likely to carry on rising considerably in the coming months. Some warned that the bulk of price increases were yet to come.

Lord King said: “The real issue here is that we don’t produce all the energy ourselves. So we have to import quite a lot. And that means that when energy prices go up, it’s a bit like the rest of the world imposing a tax on us as a country, so we’re as a country, we’re worse off. And there’s nothing we can do about that.

“That makes it much, much harder to provide help and support for those who are hardest hit, because it’s going to double down on the hit on people on average incomes or better off incomes, and there just aren’t enough very rich people to tap to make that transfer to keep the rest of us from suffering too much.

“Everyone basically takes a hit when energy prices go up.”