Ministers are facing growing calls to bring forward large increases in benefits and the state pension which will be paid from next April.

A well-established system means the annual increase in benefits will match this September’s inflation rate – but will only be paid from April 2023.

The Treasury says there are technical constraints in making earlier payments.

Debt charity Stepchange said the government needed to address the shortfall between people’s costs and their incomes.

Richard Lane, from the charity, said: “While we don’t doubt that policymakers are aware of the problem, at present the measures being taken to plug the gap are simply not sufficient to help many households avoid incurring debt as a result of the rising cost of living.”

Last month, Citizens Advice called on ministers to increase benefits in line with the current rate of inflation.

How the system works

State benefits including universal credit, older benefits such as disability support and jobseeker’s allowance, and the state pension increase once a year, in April, to match the rising cost of living.

They are pegged to the inflation rate the previous September, although the state pension can also be linked to higher earnings or 2.5% – known as the triple lock.

Benefits and the state pension went up by 3.1% in April this year, to match the inflation rate in September 2021.

At present, that is some way behind the rate at which prices are rising, which was at a 40-year high of 9% in April according to the latest official figures.

Forecasts suggest the rate of price rises could climb by this September. In turn, that would mean a rise in benefits and the state pension of close to 10% in April 2023.

In reality, people are paying higher prices for things now, but will receive higher benefits later.

“Intervention is urgently needed to catch people before they fall into crisis in the months to come because our social security system should be able to provide the protection to weather this storm,” said Michael Clarke, head of information programmes at the charity Turn2us.

“The government must act as a matter of priority and ensure that as a minimum, benefit levels are increased to meet the true cost of living and they assess their own practices of benefit deductions so that money is not taken away from people at a time where they need it most.”

Should the system change?

Economists at leading think tanks said there would be little effect on the public finances – and the £250bn welfare bill – if the Treasury decided to bring forward some or all of that increase.

“There is pressure on the government to fast-track the rise,” said Robert Joyce, deputy director at the Institute for Fiscal Studies, an economic research group. “There has been a reluctance to do something so far.”

Karl Handscomb, senior economist at the Resolution Foundation, said that keeping people waiting until next April was “a recipe for more debt”.

“The main thing is the need to provide more support for those highly reliant on benefits,” he said.

He said some people on the state pension would be among the most vulnerable to rising energy bills in the coming winter.

Pensioners Mike Gibbons 75 and his wife Ev, 72 have six daughters between them but the rising cost fuel makes visiting them very expensive.

At the same time, the Southampton-based couple are grappling with an £88 monthly rise in energy bills after their provider PurePlanet went bust and they moved to Shell. 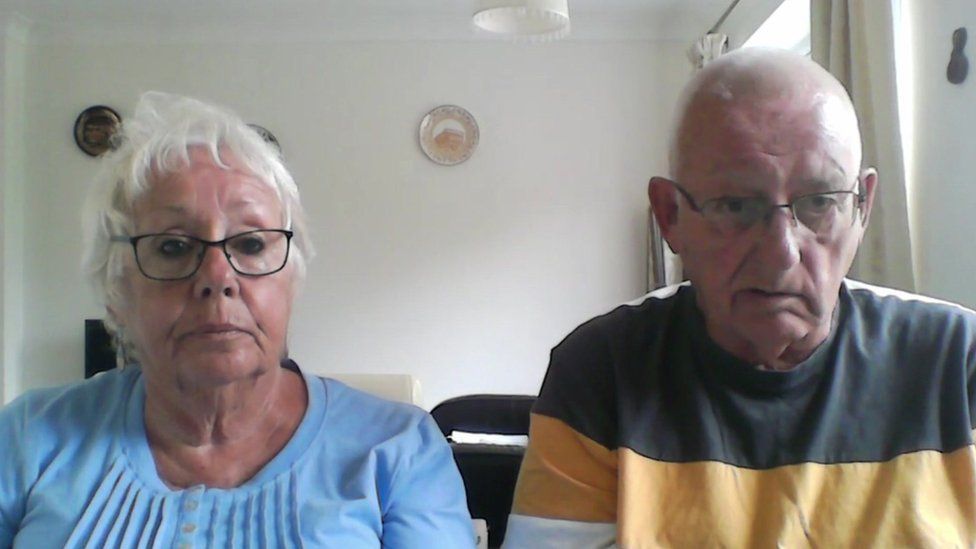 Mr Gibbons says that each 450-500 mile trip to see some of their family in Newcastle-under-Lyme now costs £25 more in petrol.

Mrs Gibbons said: “It’s making it more difficult to see our family on a regular basis because you just can’t afford it anymore the money’s not there. We just can’t see our children as much as we’d like to.”

Imran Hussain, director of policy and campaigns at charity Action for Children, said that “more and more families are starting to run out of road as they face inflation at its highest level in a generation, spiralling energy bills set to rise further and an entirely inadequate benefits system”.

He said: “They need help with meeting basic living costs now, not warm words hinting at action in the future.”

Why has no change been made?

There are no plans in the Treasury to increase benefits or the state pension before next April.

One of the key reasons for that, according to Chancellor Rishi Sunak, is that the welfare systems involved made it technically difficult to change the uprating and paying of older benefits before April.

It is possible to alter universal credit payments relatively quickly, as was done during the pandemic. Other payments such as disability support could take months to change.

Mr Joyce said that IT issues were no excuse for inaction.

“Even if they need a few months’ notice, that is better than waiting another year,” he said.

Mr Handscomb, from the Resolution Foundation – which focuses on people on lower incomes, said: “If they get started now, they can do it before the next energy price rise in October.”

He said that the benefits system was the best way to get money to those who needed it but, even if that proved impossible, there were other ways to help people out. This targeted support could include paying more to aid people to pay their energy bills.

The Treasury said such help was already in place.

“We understand that people are struggling with rising prices, and while we can’t shield everyone from the global challenges we face, we are supporting British families to navigate the months ahead with a £22bn package of support,” a government spokesman said.

“That includes saving the typical employee over £330 a year through a tax cut in July, allowing people on the universal credit taper rate to help people keep more of the money they earn – benefiting over a million families by around £1,000 a year, and providing millions of households with up to £350 each to help with rising energy bills.”