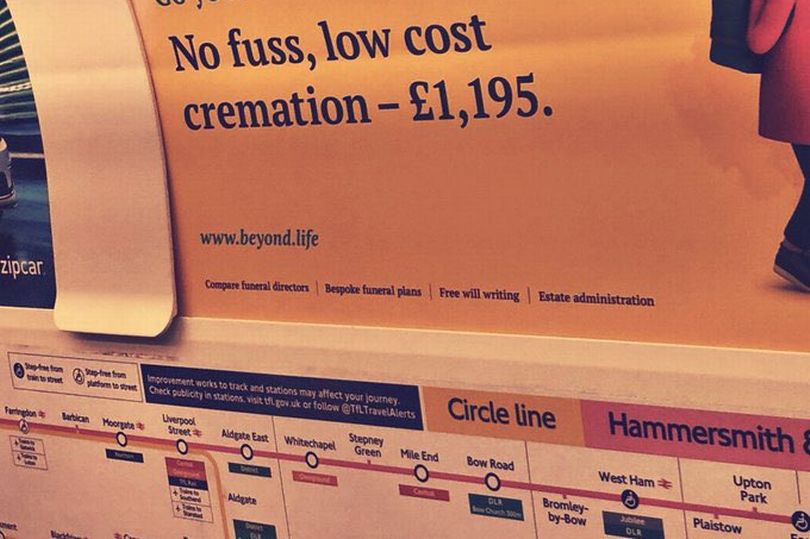 Londoners have mocked a London Underground advert which ‘reminds us we can’t even afford to die’ amid the cost of living crisis. The advert, spotted on the tube this week, reads “Low cost, no fuss cremation – £1,195”.

“London. Reminding you that you can’t even afford to die.”, one person wrote alongside the picture on Twitter, to which others piled in. In an attempt to make light of the grim advert, people shared some jokes about the apparent high ‘cost to die’.

“1.2K for cremation??? Bro just burn me at the stake” one person joked. “I wonder how much oxygen will cost before you die” another replied. Other comments included: “£1195? Shoulda added a little .99p padapapapaaaa i’m lovin it” and “Yep, forget I’m too young to die, I’m too poor. Lemme save up first”.

Another person took aim at the Circle Line, where the advert was spotted. They joked: “Given it’s the circle line, you’ll need cremating by the time you get to where you’re going

Others took a more serious approach, sharing their genuine surprise at the cost of a funeral. A Twitter user wrote: “I was 25 when I discovered all the costs that go into a death, not just the cremation or burial services but even before that… The death certificate. I had no idea they charged for that, mot to mention all the paperwork to sort out affairs. How ppl manage is beyond”

“Dunno if people know how much funerals cost but this is on the low end” another person said. According to MoneyHelper, on average, the cost for a burial is £4,383 and £3,290 for a cremation.