Derby woman in tears over cost of living crisis 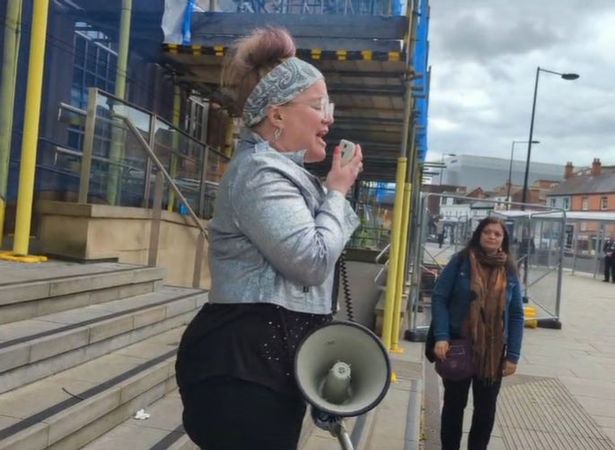 The 44-year-old spoke with great passion

A Derby woman broke down in tears as she spoke out in fear over the cost of living crisis. Abigail Allen spoke as part of a protest about the financial crisis outside Derby city centre’s Council House .

Ms Allen, 44, who lives in Alvaston, gave a powerful address during the demonstration which prompted a round of applause and words of sympathy from those watching.

She said tearfully: “I think it is time that people look at how other people are suffering and what they are going through. There are so many people just sat thinking ‘I get paid on Thursday and I’ve got nothing left’. What are they meant to do?

“How are they meant to go forward (throughout) the next month waiting for their benefits? It’s making me upset. I get angry. I see my friends, I see how I’m helping them – how I give them a little bit of money. How I give them food – what the hell is going on?”

Ms Allen then returned to the steps minutes later and apologised for crying during her address.

She added: “I just want to say sorry for getting tearful. It’s just so crazy how you see elderly people staying in bed all day or going on walks to keep warm. They are not here today. Isn’t it time for somebody to say ‘this is enough’? We can’t all go to London to protest. It’s time to make changes. I am panicking – it’s horrendous.”

The protest was put on by organisers of the Fair Chance Derby campaign on Wednesday afternoon, May 25, which has so far amassed more than 500 signatures from the public. The campaign urges Derby City Council to sign up to a Socio Economic Duty Act which effectively would mean any decision the authority makes in future would have to consider any potential consequences to Derby’s poorest or most vulnerable.

This comes at a time of a cost of living crisis where household bills have soared – particularly energy bills, with some seeing spikes of more than 50 per cent when prices increased last month. Inflation in England is at its highest in decades which has seen jumps in the prices of food, petrol and diesel. The protest took place just before the council’s annual general meeting was to commence which included a motion from Labour councillors on behalf of the campaign.

Today, Thursday, May 26, the Government announced a string of new measures including that every household in the UK is to get an energy bill discount of £400 this autumn – replacing the £200 loan scheme previously announced. The lowest income households will be sent a one-off payment of £650 and the Government has also announced that eight million pensioners across the UK will receive an extra winter fuel payment of £300. Help is also being given to disabled people with a one-off payment of £150 to those eligible.

Reports say the £15billion support package will be partly funded through a 25 per cent windfall tax on oil and gas firms’ profits – something the Labour party has long called for. This Government involvement appears to have come following the news that the energy price cap is expected to rise up to £2,800 this winter – meaning people’s energy bills are set for another significant increase.

Many people living in council tax bands A-D have already received a £150 council tax rebate payment. While many others – specifically those who don’t pay council tax by Direct Debit – are still waiting to receive it.