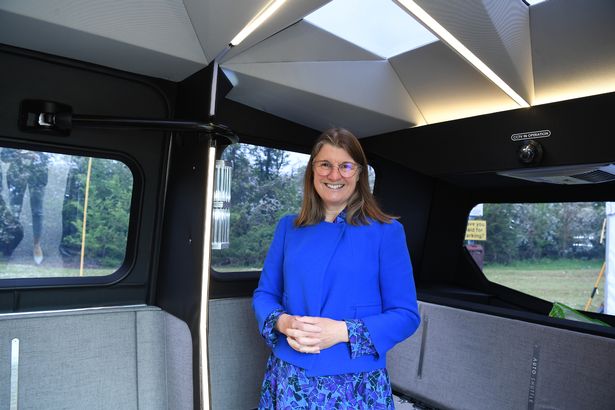 A Tory minister has suggested struggling Brits work more hours or get a better paid job to cope with the cost of living crisis.

Home Office Minister Rachel Maclean said the Government wanted people to be able to “protect themselves better” from rising costs in the long term.

Labour accused the minister of being “out of touch” over the challenges facing struggling Brits, who are being clobbered by tax hikes, soaring energy bills and rising costs.

Boris Johnson has resisted calls for an emergency budget and extra help could take until August to deliver.

Average household bills have already rocketed by nearly £700 – and could rise further when the energy price cap is reviewed again in the autumn.

The price cap on household energy bills could be reviewed every three months under new plans mooted by Ofgem on Monday, in fresh misery for struggling families.

The energy regulator said that it might insert two new reviews a year, one in January and another in July.

Ms Maclean was asked if there should be a cost of living minister to deal with the escalating financial pressures.

She told Sky News: “I’ve not heard that specific request but what I would say of course is that’s the Chancellor’s job and it’s the job of the whole Cabinet and the whole Government.”

She went on: “I think what we need to focus on now is over the long-term, we have got these short-term pressures on us that we’re all aware of … but over the long-term we need to have a plan to grow the economy and make sure that people are able to protect themselves better – whether that is by taking on more hours or moving to a better-paid job.

“These are long-term actions but that is what we are focused on as a Government.”

Ms Maclean said she was not “suggesting for one moment” that such an option would work for everyone, adding: “It may be right for some people, they may be able to access additional hours, but, of course, it is not going to work for people who are already in three jobs.

“That’s why we need to have the other measures, such as all the help we are putting into schools, the help with the local authorities … and that’s where we are going to target help to where it is most needed.”

Ms MacLean became Tory MP for Redditch, Worcestershire, in 2017 after a high-flying career in banking and business where she set up a firm with her husband that posts more than £1m in profits a year.

Her comments sparked an immediate backlash.

The shadow Scotland secretary said: “Sounds like the Norman Tebbit ‘get on your bike’ instructions from the 1980s.

“It’s so out of touch with reality that I’m sure the minister knows how ludicrous it is, but they’ll defend Boris Johnson at all costs.”

Liberal Democrat work and pensions spokesperson Wendy Chamberlain said: “So the Conservatives’ answer to the cost-of-living emergency is that people should just earn more? This shows just how out of touch they truly are.

“Millions of families have had to make huge cutbacks and taken on extra work in order to weather the cost of living crisis. They simply cannot do any more.”

“Millions are working flat out but are still struggling to cover the basics,” he said.

“We need an Emergency Budget now to get families through this cost of living crisis. And we need action to tackle precarious employment.

“It’s a bit rich for ministers to tell people to find better-paid work – especially when they have presided over an explosion of low-paid and insecure jobs.”