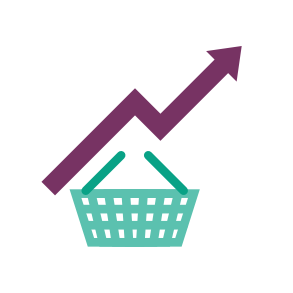 Grocery prices in Britain rose at the fastest pace in 13 years, with a quarter of shoppers struggling to make ends meet, adding to the cost of living crisis consumers face.

Market research firm Kantar, found over one-fifth of households were “struggling” to make ends meet as grocery price inflation hit 7% in the four weeks to 15 May — up from 5.9% the month before.

Researchers said the rising price of groceries was of concern to over nine in 10 of the 22% of shoppers struggling financially, making it the second most important issue behind rising energy bills.

“People are really feeling the squeeze at the supermarket tills and they’re having to stretch their budgets further to accommodate rising prices,” said Fraser McKevitt, head of retail and consumer insight at Kantar.

“To put the most recent numbers into context, if you were picking up supplies for a family fry-up over the long weekend with toast, eggs, sausages, bacon and beans it would cost you £6.83 — that’s a significant 40p increase on last year.”

UK inflation rose to a 40-year high of 9% in April on the back of higher energy, food and fuel costs, and recent analyses show inflation is nearly 11% for Britain’s poorest households.

Supermarket sales have dropped 4.4% over the latest three months, in comparison to last year when restaurants and offices were still affected by pandemic measures.

German discount supermarket Lidl saw its sales boosted 6% in the 12 weeks to 15 May. It was ahead of its rival Aldi which saw sales jump by 5.8%.

Lidl hit a new market share high of 6.9% while Aldi hit a 9% share of the market for the first time.