‘People cry, they’re so hungry’ – On the frontline of city cost of living crisis 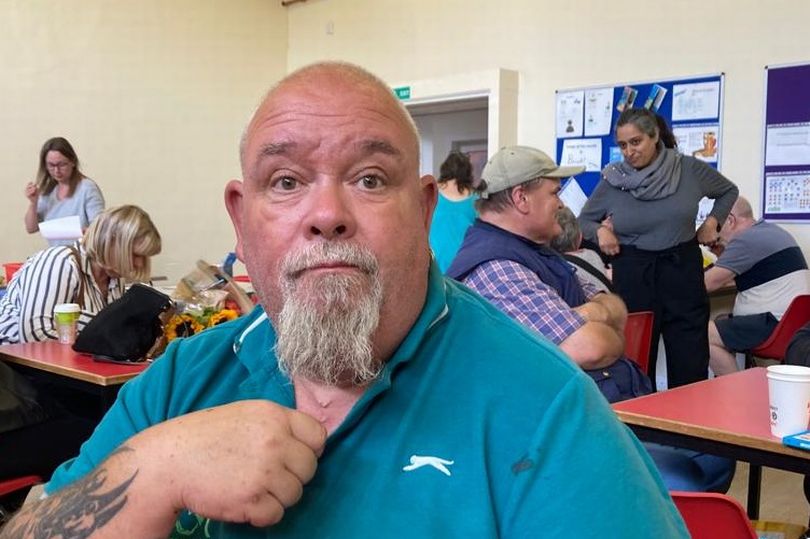 By Tom Blackburn and Rachel Alexander

Parents in North Staffordshire have opened up about the appalling challenges they face as they struggle with the cost of living crisis. They have described the tough choices they are being forced to make every day, trying to cover “eye-watering” fuel bills soar and feed their families in the face of rising food prices.

New figures reveal up to 40% of children in Stoke-on-Trent are living in poverty – just 10% behind the borough in which the poorest kids in the UK live, London’s Tower Hamlets. In Newcastle, the rate is just under 27%.

Mum-of-two Rebecca Marston volunteers at the Bread of Life Community Pantry in Chell Heath. She said she feels like living conditions are going back decades.

Rebecca, 35, from Kidsgrove, said: “The thing is, it’s never going to get better. I was born in the eighties, but we’re going back to the fifties and sixties … how they used to live then.

“We shouldn’t be going back, we should be going forward.

“It’s getting worse. If you break it down you’ve got the rent, your council tax, your gas and electricity. I can’t say my gas has gone up anymore but my electric has gone up £15 a week.

“It’s just like with car insurance for example, where my mum lived on an estate, she kept her car in her garden surrounded by a big fence, it was all secure but because she lived on an estate, it was much more expensive to leave it there, rather than on the street somewhere nicer.

“When we first started this (the foodbank), we used to have 50 people coming. Now we’ve got 250 coming with a long waiting list.

“I was working full time at a supermarket, then I had to start caring for my son outside of school hours and they wouldn’t accommodate my hours. When he was at school I thought, what should I do with my days? And that’s when I came and started volunteering.

Zendaya Shah, an admin worker from Burslem who has three children, said she was disappointed to learn rates of child poverty were so high.

She said she had to deal with huge pressure on the household budget, adding: “We try and save the pennies, but we’ve seen a massive spike in costs, and we’ve got a pre-paid metre for the energy. My husband works full time and I’m going back into work. When things were good I was working full time, but putting my children into day care was about £1000 a month. That was about five or six years ago. I wouldn’t be able to do that now.

“It’s very disheartening that this part of Staffordshire is one of the most deprived wards of the county. Having grown up here, you just feel forgotten about. The rents are increasing. Also, why is child poverty here almost double some of the other areas in the county? My next question is what’s being done about it? It’s all very good and well saying we’re aware there’s a problem but what will they do about it?

Zendaya said she was thankful to Becky Berrisford, who set up the Chell Heath community pantry.

She added: “I don’t know what I’d do without people like Becky. This is the norm now. This is what you have to do to survive. I know you get some help with the rebates and the other stuff but I’m not eligible for that. I’ve always worked, I’m starting back again once the kids go back to school.

“This has long been a deprived area, and I just got used to it. Seeing the profit margins of the utilities companies – there’s just no need, it’s eye wateringly expensive. The only way it won’t affect you is if you’re rich. It’s just unnecessary.”

Stephen Pitchard, 58, is a welder from Chell Heath. He has two children and himself uses the community food bank.

“I’ve got a neighbour who is struggling. We’ve been giving her food. It’s coming towards the end of the month and she can’t wait. It’s only going to get worse this is. I feel sorry for people who’ve got little kids.

“The bills have gone up ridiculously. I’ve always been on a pre-paid meter so I always know how much I’m putting on.

“I don’t get a bill. I used to put £20 one week then £10 the next. The £20 doesn’t last one week anymore. We tried to top up the gas now the best we can. We’re not using it so hopefully, if I buy it at this price I’m hoping by winter I’ll have got it at a cheaper rate. It’s due to go up in September isn’t it. The only problem with stockpiling is that people will start going round and pinching it.

“People aren’t going out as much either now to the seaside or on day trips as the fuel has been that expensive. The kids aren’t going out or being taken places. We used to go out once a fortnight or so but we don’t go out anymore, we’ve stopped. Everything else costs that much.

“My friend who’s got a pub in Tunstall, he said his trade has gone down by a third since Christmas. That’s another knock on effect, people are spending more on food and bills but it’s a knock on effect for businesses. It’s only going to get worse.”

Helen Snashall, 46, from Fegg Hayes, is a community development manager at Fegg Hayes Futures. She was at the Chell Heath Bread of Life Pantry when StokeonTrentLive visited.

She said: “We had a lady coming to us looking for help, we did her some beans on toast while she was there because she hadn’t eaten for two days. She was crying and we put together some food for her. She was so grateful for the food.

“There are so many people struggling, not just those on benefits. In fact, its a struggle as much for families that are in work.

“They’ve heralded all the new jobs coming to the area, but if you look around you see they’re not full time, they’re minimum wage and if you need child care on top of it, what do you do?

“I think if the jobs could work around parents schedule or have better pay, but we’re all guilty, we all want our goods cheap and delivered quickly from Amazon.

“Some schools are good at doing after school care and things like that. It would be good to have more universal before and after school clubs. Holiday provision, there’s a lot of support for families during holidays but not as much for working parents, and a whole day’s wages can go on child care during the school holidays.

“We are seeing more people struggling financially, the energy costs are a huge one for people. People are looking for innovative ways to make savings. Which is where something like the pantry is great because it’s sustainable, it just helps people save some money.

“Then they can use any savings on energy costs. We give away surplus supermarket food as well and we do that as much around reducing food waste, as helping people out. There’s no barrier, anybody can take that. I know for some people just to get an extra loaf of bread then that’s a couple of quid they can use elsewhere.

“Over the winter, we had some funding through the city council around winter. We also have citizens advice bureau offering classes on money management and debt management. I know there’s a few cases ongoing with these people who are in quite serious debt.

“There’s a great community spirit, there’s a lot of people who are just getting by. It’s when the crisis hits and their washing machine goes and they don’t have the savings to buy even a second hand washing machine. As we get towards the winter and everything rises more, for those who are just scraping by now, that’s when they are really going to struggle.

“I think people don’t always know where to go for support and they bury their heads in the sand.”

She added that in many ways, people who are in poverty pay a premium for not being able to afford to spend the extra cash to get better quality goods.

She added: “There’s a quote from Terry Pratchett, the author. He says if you can afford to buy a decent pair of boots they’ll last you forever and you only have to pay once, but if you can only afford the cheap ones you spend more having to buy more pairs.

“It’s the same with school shoes. If you can only afford cheap school shoes, you will end up buying more pairs during the year.

“And it’s the same with the supermarkets: there are cheap ones and some have better deals than others, but if you don’t have a car, you’ve then got a taxi or bus fare or walk. I can jump in the car and go to Asda, Aldi or Lidl, but some have to rely on shops that are within walking distance.

“Looking at the costs, a while ago there was an MP talking about 30p meals, it was in the national news earlier this year. He said, families just need to learn to cook on a budget ad e reckons you can make a meal on 30p. I was in Tesco at the same time as it was in the news and one banana, just one, was 27p.

“Healthy eating, if four bananas is going to cost over a quid, or you can buy a big frozen pizza, which would you do?”

The End Child Poverty Coalition – which represents 70 anti-poverty organisations – warns that the recent decline in child poverty is likely to prove temporary. This is because the £20 uplift to Universal Credit, which was credited with reducing child poverty, has since been revoked by the government.

“It still feels like we are on the edge of a precipice. There is significant concern the numbers of children in poverty will rise again sharply, with families facing huge cost increases,” said End Child Poverty Coalition chairman Joseph Howes.

The End Child Poverty Coalition has added an online tool to its website, breaking down its child poverty data by individual parliamentary constituencies. Child poverty in Staffordshire’s 12 constituencies was as follows in 2020-21:

The End Child Poverty Coalition is appealing to the government to take a series of measures to tackle child poverty. In particular, it wants to see the benefit cap scrapped and an end to deductions from Universal Credit, improved access to free or affordable childcare, and free school meals extended to all families in England and Wales on Universal Credit.