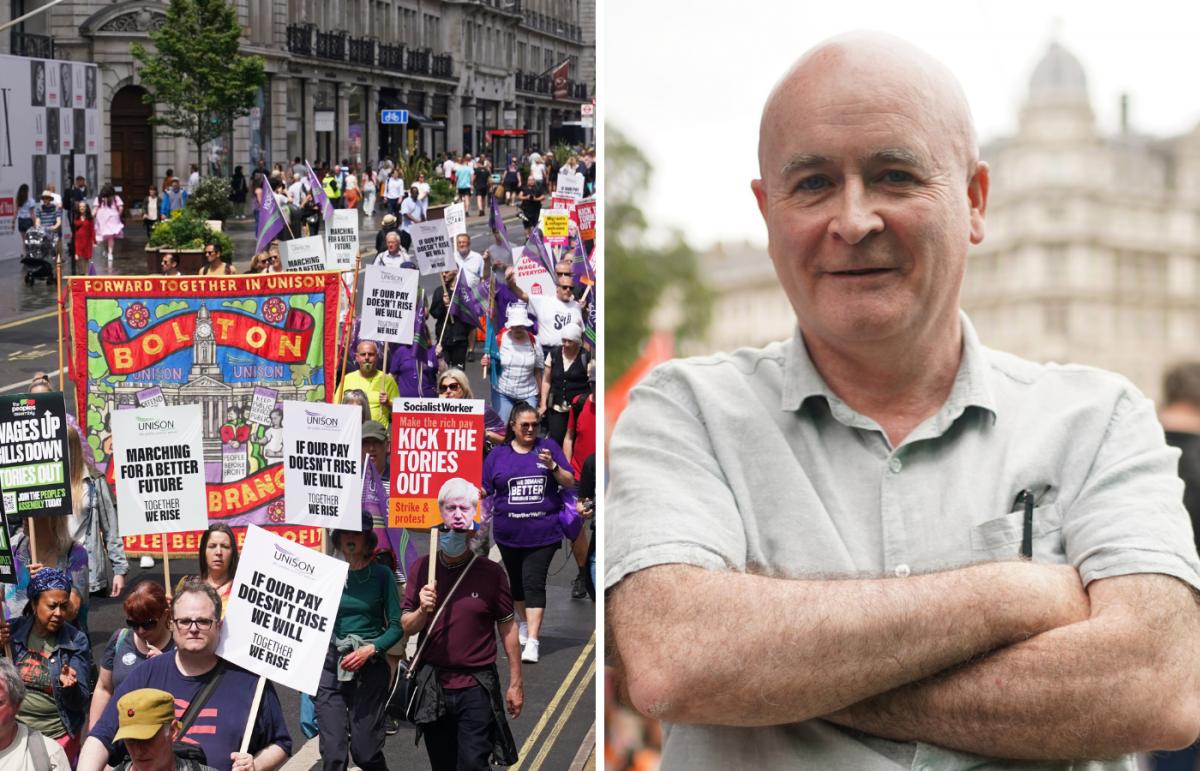 The head of railworkers' union RMT has called for a general strike over the cost of living crisis.

The comments came ahead of industrial action this week that will see train services across the UK severely disrupted.

Speaking to BBC Radio 4 on Sunday morning, RMT chief Mick Lynch said: “Working people in this country are fed up with low pay and precarious work, as well as having decent conditions under threat.

“They’re living a life where they don’t know where their next bills going to be paid from.

“We’ve got a working class, working full time hours, that are having to go to food banks and take state benefits.

“I want coordinated action by the entire trade union movement.”

“There are more billionaires than we’ve ever had.

“Profits and dividends and the stock market are in a very healthy position, while working people with full employment are having to take state benefits.

“That means the rich are doing too well compared to the working class.”

A general strike is one in which staff in all or most workplaces in the country take part. The last one to happen in the UK took place over nine days in May 1926, over pay cuts for miners.

On Tuesday, Thursday and Saturday this coming week, staff at Network Rail and 13 train operators will go on strike over pay, conditions and job cuts.

Though Transport For Wales workers are not taking part in the action, strikes at National Rail – which owns and maintains the majority of our tracks, signal boxes and tunnels – will result in Welsh service disruption.

For a guide to how the strikes will impact Wales, see here.

“I think it is a huge act of self-harm to go on strike at the moment,” Mr Shapps said.

“I don’t believe the workers are anywhere near as militant as their unions who are leading them up the garden path.

“They are gunning for this strike. It is completely unnecessary.”

UK Labour, meanwhile, has accused the government of “pouring petrol on the fire” of the rail dispute.

“The Government has got to get round the table with the cleaners and the ticket office staff and the station workers to resolve this, because they’re the only people who can,” said shadow communities secretary Lisa Nandy on Sunday.

Speaking to Sky News, Nandy added: “During the pandemic they took the right to negotiate back from train operating companies, so they’re the only people who can resolve this and yet they’re not prepared to.

“The biggest problem that this country has is not militant workers, it’s a militant Government.”

Labour leader Keir Starmer said in a speech today: “Instead of grown-up conversations to take the heat out of the situation, they are pouring petrol on the fire.”

“Instead of bringing people together in the national interest, they are stoking division in their political interest.”

However Mr Starmer also repeatedly stated that he did not want the strikes to go ahead, prompting criticism from trade unions.

“Labour should be comfortable with backing working-class people who are struggling, and one of the ways that they can redress the imbalance is through industrial action, where negotiations fail,” Mick Lynch said.

“What else are we to do?

“We want to bargain for our futures. We want to negotiate.

“I don’t want any working-class people in this country to have to beg the employers for a decent living.

“[Keir Starmer] needs to think about where the Labour Party is going.”

Yesterday, Welsh activists joined thousands of protestors in London for a march on Westminster, calling for more help with the cost of living crisis.

The latest predictions indicate that the energy price cap will rise by a further 46 percent in October this year, taking bills up to £2,879.

The rate of inflation – which measures changes in living costs, such as food and utilities – is expected to reach 10 percent later this year, the highest rate since 1982.

For the poorest households, which are expected to be disproportionately hit, inflation could reach as high as 14 percent.