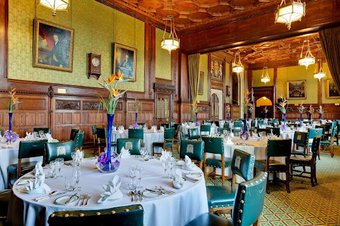 Exclusive: Restaurants and bars in the House of Commons cut prices for MPs, as they were bailed out by taxpayers

Taxpayers have forked out £17m to subsidise bars and restaurants in the House of Commons over just three years, openDemocracy can reveal.

MPs have enjoyed cut-price meals, with the average cost of food in the Members’ Dining Room reduced by more than £1 between 2018 and 2021.

In fact, politicians could have a full three-course meal at the restaurant for as little as £10.41 last year.

This is despite all 17 of the bars and eateries in the House of Commons making huge financial losses – totalling £6.6m in the first year of the pandemic alone.

It comes as the UK faces a growing poverty crisis, with food costs spiralling. This week, the chairman of Tesco warned: “We’re seeing real food poverty for the first time in a generation.”

But Conservative politicians have been branded “out of touch” for their response. Yesterday, Ashfield MP Lee Anderson even appeared to blame poor people for the crisis, saying they “cannot cook properly” and “cannot budget”.

Meanwhile, MPs themselves have enjoyed restaurant-quality meals on the cheap, thanks to public subsidies.

Data obtained by openDemocracy shows that every bar and eatery on the House of Commons estate made an overall financial loss in the three years up to 2020/21.

Menu prices were finally raised by 3.4% last month. But the new menus are still cheaper than most commercial competitors – and the rise is significantly less than the 5.9% inflation in food prices that has hit ordinary consumers.

Food and drink is so cheap in Parliament that nearby commercially run cafes and restaurants have been undercut.

Last year, MPs could buy a pint of beer in Parliament’s Strangers’ Bar for just £3.45 – compared to the London average of £4.84.

A margherita pizza in the House of Commons cost £3.51 less than it did at the closest Pizza Express.

And MPs could get a double espresso for £1.16 from a taxpayer-subsidised cafe – compared to £2.40 from a Cafe Nero that operates commercially in a parliamentary building.

Last year, the price of a glass of wine started at £4.26 in the House of Commons, compared to £6 at the local Red Lion pub today.

And fish and chips was just £6.41 in the Members’ Dining Room last year, compared to £18 in the pub today.

In contrast, members of the public who wish to visit the House of Commons are charged £53 for a private dining experience with a three-course meal.

Visitors also pay £5 for a bowl of soup, compared to just 88p for Westminster insiders eating at the Members’ Tea Room.

This is despite the fact MPs have already had a £2,212 pay rise this year, bringing the total ‘basic’ salary to £84,144 for a backbencher.

Responding to a Freedom of Information request from openDemocracy, the House of Commons claims its venues “do not provide a subsidised service in the commercial sense of the word”.

“Rather than a subsidy, the House monitors the contribution or cost of each catering venue,” it said. “Prices of food and drink are regularly benchmarked against appropriate external comparators.”

But this claim has previously been debunked by FullFact, which noted: “While food and drink aren’t directly subsidised, public money is effectively spent subsidising the whole operation”.

The facilities are accessible to just over 15,000 people in total – including 650 MPs and 771 peers, as well as parliamentary staff and a group of political journalists.

A House of Commons spokesperson said its catering services “unavoidably come at a cost due to the irregular and unpredictable hours that Parliament works”.

They added: “Parliament provides a range of catering services and as a workplace this includes staff canteens that are available to Members, House staff and the Press Gallery. The service continuously seeks to reduce costs whilst regularly benchmarking their prices with venues outside of Parliament.”