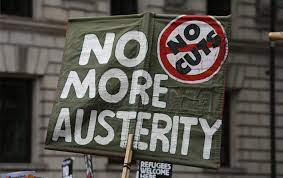 Most of us are having to cut back on our spending. For some this is an inconvenience; for others it means going without gas and electricity.

Here in Britain, as in every other country, we are not quite one nation, strictly speaking. Instead we are several nations which try to rub along under the national flag. I’m talking here not about the nations of the Union, but about social class. As George Orwell famously wrote of England, when it comes to class Britain as a whole is like “a family with the wrong members in control”.

Another national image, in a phrase popularised a decade ago by two former members of the Bullingdon Club, is that we are “all in it together”. At that time, during a period of economic austerity, the slogan provided a useful foil for a brutal austerity programme, despite it being very far from the truth.

Austerity fatigue probably means that calls for the country to pull together to accept reduced public spending and lower living standards are likely to founder. According to the think tank the Institute for Public Policy Research, in-work poverty already stands at a record high of 17.4 per cent. Meanwhile, 14,000 tenants are facing potential eviction as living costs soar.

Another reason efforts to persuade the country to unite are less likely to work this time around is the transformation of conservatism into a vehicle for right-wing populism. As has been perceptively pointed out by the journalist Dorian Lynskey, contemporary right-wingers aim to wield power while constantly complaining that they don’t have any.

This narrative of victimhood was successfully marshalled by the Leave campaign during the Brexit referendum, when “EU elites” were said to be attempting to thwart British democracy. A reluctance to drop a winning formula probably accounts for its deployment by the Conservative Party under Boris Johnson.

Occasionally the government has paid pay lip service to a more far-reaching economic transformation. It has promised to “level up” deprived areas and Michael Gove has been calling for the equivalent of an oligarch tax.

Yet the Tories are at their heart a landlords’ party. Attempts by the party to metamorphasise into a vehicle for workers are worth about as much as a bag of hammers. As has been observed by the economics writer Chris Dillow, Conservative MPs such as Jacob Rees-Mogg are rallying workers to get back to the office not out of benevolent concern for coffee shop staff, but to appease the landlords of office blocks. As Karl Marx said in 1852:

“[T]he Tories in England long imagined that they were enthusiastic about monarchy, the Church, and the beauties of the old English Constitution, until the day of danger wrung from them the confession that they are enthusiastic only about ground rent.”

The presence of opposing class interests seems obvious enough when we assess the hardships people are currently facing. Most of us are having to cut back on at least some of our expenditures. Yet the difference between a middle-class salary and a lower income could be the difference between reducing the hours of the family au pair and going without gas and electricity.

We aren’t “all in it together”, as George Osborne used to fatuously say as he wielded the axe as chancellor. We never were. And while this shtick might have worked for a short time, it was bound to run out of road eventually. The “elite” and the “establishment” do not appear to be suffering at the present time, despite the soaring culture-war rhetoric. In practical terms, Universal Credit has been cut and the government has just voted down a windfall tax on the big energy companies (although there may be growing pressure from some Tory MPs to reverse this decision).

Furthermore, instead of taxing land (which has seen its value soar in recent years) the government has gone after small businesses and lower- and middle-income earners through a hike in National Insurance contributions. Increases in National Insurance – which functions a little like a flat tax, in that most employees pay the same percentage of their earnings in NI – look likely to be offset by a 1p income tax cut. This will effectively represent a shift in the tax burden from the wealthy to those earning less, though it won’t be reported that way by the Tory-supporting press.

Social class is playing an increasingly prominent role, too, in public debates around the cost of living. It is here that the Tories are really coming unstuck as tone-deaf statements are made with increasing regularity by Conservative MPs. Despite being sheltered from the worst of the cost-of-living crisis themselves, Tory ministers have taken to the airwaves twice in the past week to proffer out-of-touch and cack-handed advice to working people as to how they should weather the economic storm. As inflation hits a 40-year-high, those struggling to pay their bills and keep a roof over their heads have been patronisingly advised to work longer hours and told they can’t cook properly.

In other words, for all their claims to be winning the working-class vote over from Labour, there is a limit to what the Conservatives are able to say and do when it comes to the spiralling cost of living. In the weeks ahead we’ll be encouraged to put our differences as a nation aside and celebrate the Queen’s diamond jubilee. Once again there will be an attempt to create a narrative that we are “all in this together”. Yet too much has elapsed since this soundbite was first trotted out during the Cameron years, and too much pain has already been inflicted on those at the bottom.

Along with its Trumpian counterpart in the US, Boris Johnson’s Conservative Party has learned that if you can’t make people richer then you should make them angry about something else instead. Many culture-war flashpoints are really about the right’s lack of insight when it comes to challenging the economic status quo.

But as Donald Trump discovered to his cost in 2020, there is a limit to how long people will confine their anger to fringe cultural issues before they start to notice that the money in their pockets is continuing to dwindle. Indeed, there is probably only so much discontent the Tories can appease with essays in the Telegraph about “woke” student madness.

Class politics is relevant once again, though not in the way populist Conservative culture warriors had hoped.