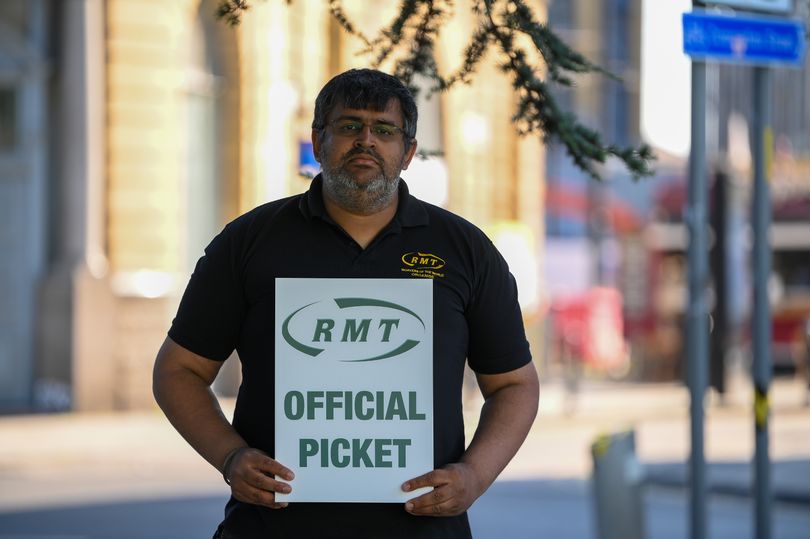 50,000 railway workers are on strike this week - the M.E.N spoke to two of those about why they felt it was the only option.

“I appreciate it’s a controversial thing because there are a lot of people who are in worse conditions, who are lower paid than us. But the argument we’re trying to make is that actually, it should be a high-wage economy, we should be levelling up.”

Standing on the picket line outside Manchester Victoria station, Dalbir Dhillon told the Manchester Evening News exactly why he felt he had to join the national rail strikes today. “Why are we being attacked? We’re not even asking for inflation rate numbers, we’re asking for a reasonable settlement”, he said.

“But it’s not just about money. It’s also about what’s happening in society, we’re having attacks on jobs, we’re having maintenance workers jobs scrapped.

Dalbir, the assistant branch secretary for the National Union of Rail, Maritime and Transport Workers (RMT) at the Manchester Victoria branch, was just one of thousands of railway workers taking part in the second day of industrial action on Thursday. Just one in five trains were running across the country in the biggest rail walkout in 30 years.

No services were running at all from Victoria, as dozens as workers picketed outside with flags and banners. One read: ‘Support your rail workers, our jobs, your safety’.

Another placard said: ‘Cut profits. NOT jobs and services. Support our transport workers’. As the bitter dispute between unions, Network Rail, rail operators and the government rumbled on, Dalbir said he wanted members of the public to support union workers in their plight for better pay and working conditions.

“We’re getting quite a lot of support, a lot of different union members have come out and shown us support”, he said.

“A lot of members of the public have shown us support. But what I’d tell the general public to come down to our pickets, ask us, we’re an open book.

“There are two sides to every story. Please come speak to us, we appreciate that there are people in much worse positions than we are.”

Clayton Clive, RMT branch secretary for south Manchester, echoed Dalbir’s thoughts that striking felt like the only option. “There’s no political appetite, so we have no choice now but to take this action”, he said.

“There’s no political appetite to help ordinary people with the cost of living so we feel the only way to do it now is on picket line.”

Speaking from the picket line outside Manchester Piccadilly, he added: “We’re striking for our jobs, pay, conditions, endless other things. I think the obvious one to start with us jobs, I think people know by now that Network Rail and the government want to cut thousands of jobs in maintenance.

“We’re the safest major railway in the world, and the government wants to throw away that for the sake of profit and ideology. Cutting maintenance jobs is not modernisation, it’s putting lives at risk.

“The government wants to close every ticket office in the country and will cut off thousands of people who don’t have access to the internet, or who are disabled or who have issues with online tickets. Everyone right now is in the same boat where we’re being told we need tighten our belts, but we all know that isn’t true and that everyone can get a pay rise in line with the cost of living.

“Ultimately, my hope is that the government engages with us.”

Yesterday, the The RMT accused Transport Secretary Grant Shapps of ‘wrecking’ negotiations after talks were held. RMT general secretary Mick Lynch said: “Grant Shapps has wrecked these negotiations by not allowing Network Rail to withdraw their letter threatening redundancy for 2,900 of our members.

Mr Shapps hit back, saying the RMT claim was a ‘lie’. Kevin Groves, head of media at Network Rail, told Times Radio Breakfast: “Negotiation is about give and take, and at the moment the RMT are just take, take, take.

“We’re talking about the modernisation of working practices that are archaic.”

Boris Johnson today branded the strikes a ‘terrible idea’. The Prime Minister said: “I just think it is important to remember that these strikes are unnecessary. I think people should get around the table and sort it out.”